ACMI and Kloke (founded by Amy and Adam Coombes) have collaborated to create a range of merch inspired by screen culture and video store aesthetics of the 90s.

ACMI: When it comes to designing a new range, what is your process?

Adam Coombes: It’s a constant, rolling discussion. Our starting point may be something that has bled out of a previous collection or idea, like a sequel or a response. We flesh out that concept over time, taking field notes and collecting words, ideas and imagery. Then we hone and cull — it’s more like sculpting than building. We tend to take too long in the development process, so we're constantly doing this tense dance between creativity and deadlines. In the end it’s probably that tension that gets us where we need to be.

A: What are some of the sources of inspiration that you draw from when designing your collections?

AC: Anything that tells a story. Each collection has an underlying concept; it’s always part of the process though its presence is usually subtle by the time we release. Music, cinema, pop culture, allegory, myth, technique/craft – everything around us and anything that has come before us. We’re usually drawn to themes that are universally recognisable or that resonate with what’s 'in the air' at the time. They’re not necessarily lofty concepts, but they help tether the creative process and bring meaning, for us at least.


A. How does the world of screen culture (films, TV shows, videogames and art) normally influence your work?

AC: Screen culture is so big and ubiquitous that it’s always finding its way into our ideas and processes. It’s an incredibly rich source with so many hooks, from soundtracks to credit design, story, cinematography, colour and technology. And costume, of course.


A: You’ve recently partnered with ACMI. What makes this a good fit and how do you see the partnership playing out?

AC: It has felt like such a natural pairing. We've found a real freedom in the creative process with ACMI’s people and been compatible with them from the very beginning. It’s a rare and wonderful thing to work like that.

A: How did your first project, ’Super Ultra 120’ come about?

AC: There was something in the archival part of what ACMI does that we really liked. Perhaps the 'roided-up intensity of technology today got us feeling romantic about older, slower, lower-fidelity technologies of the past. There’s just something nice about all its noise and glitches, and the tech-hyperbole and dynamic graphics that accompanied it are hilarious. We wanted to go back there, to the video store and that moment when you had six bucks in your pocket, a mate coming over, a Saturday night to kill and a world of possibility laid out before you on those shelves.

AC: The concept behind the range is drawn from the VHS vs Beta(max) format wars. Early in the format war, VHS held the upper hand with a superior length of recording time – 120 minutes. But the Beta format was heralded as superior in terms of quality. Beta finally did make a 120-minute tape but by the time they did, VHS already had too big a market share. That's why we decided to name the project 'Super Ultra 120’, we liked the idea of forming a video club that doesn’t exist: the ’Super Ultra 120 club’.

We chose icons and motifs that link to original video store graphics and their fascination with Medieval tropes because we loved the idea of a hi-tech (at the time) medium being represented by something so historic. We also gave a nod to the fact that this was the first time you could take something home and watch it whenever you wanted – 24/7 – but only for 7 days – nostalgic references that link the concept together but also take it elsewhere. 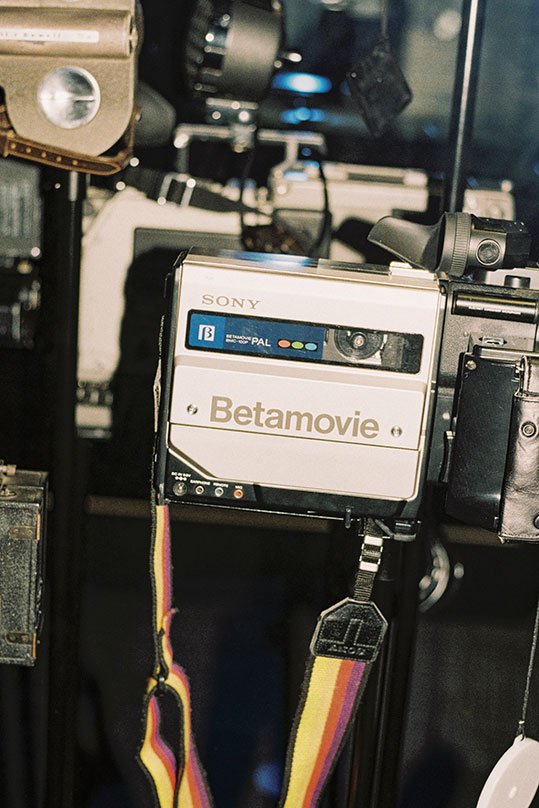 A: What is Kloke’s philosophy and approach to fashion?

AC: It’s pretty loose; wear what makes you feel happy. We’re always thinking about best-practise construction, sourcing, and making things that last because that stuff is important, but in terms of self-expression, at the end of the day, clothes should make you feel like yourself. Sometimes a soft, trusty old sweater does that better than anything else, and sometimes something a bit sharper is called for. Either way, trust yourself and you can’t go wrong.


A: Do you do mood boards? What are some examples of your process that you’re comfortable sharing?

AC: We don’t really do mood boards. I’m not sure why but they’re just not for us. I think we collect far too much stuff – photos, crops, screen grabs, scribbles, notes, etc. – that’s around us all the time as a sort of big, ever-changing conversation. I guess we’re a bit scrappy at this part of the process and we glean all sorts of weird and wonderful things that come in and out of that conversation all the time.


A: What have you been watching or playing recently?

AC: Just the other day I watched The Goonies (1985) with my youngest son who is six years old – his first viewing and about my 25th! It was such a ride, he loved it. We also just re-binged The Wire (2002–08) – what a masterpiece – and we’ve knocked over every Studio Ghibli movie possible with the kids.

The first drop of ACMI x Kloke range Super Ultra 120 is available now in the ACMI Shop and Kloke stores in the CBD and Fitzroy.

You have no items in your cart

Login or register to create a wishlist